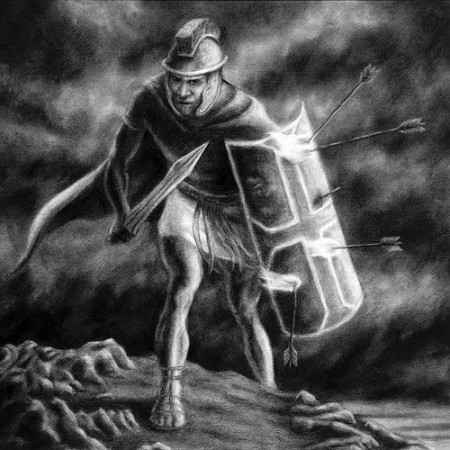 The answer is a qualified ‘yes.’ It is not that WE have God-given authority over Satan; rather, it is that Christ in us does. As John wrote, “Greater is he that is in you than he that is in the world” 1 John 4:4. This needs to be balanced by Jude 9 where Michael, one of the archangels, would not dare to pronounce a judgement against the devil, but instead said, “The Lord rebuke you.” There is a significant balance here. Although I would not call it blasphemous, I would say that when charismatic and Pentecostal TV preachers ridicule the devil with all sorts of silly taunts such an act is stupid. There needs to be a profound respect for the devil’s POWER, even though we have certainly lost all respect for his person. And we are puny human beings who could not stand up to him for a second—were it not for the indwelling Spirit of God. It is God, not we ourselves, who will fight our battles.﻿

and have overcome them,

because the One who is in you

is greater than the one

who is in the world.

Luke 10:19 I have given you authority to trample on snakes and scorpions and to overcome all the power of the enemy; nothing will harm you.

Romans 16:20 The God of peace will soon crush Satan under your feet. The grace of our Lord Jesus be with you.

Romans 8:37-39 No, in all these things we are more than conquerors through him who loved us. For I am convinced that neither death nor life, neither angels nor demons . . . will be able to separate us from the love of God that is in Christ Jesus our Lord.

James 4:7 Submit yourselves, then, to God. Resist the devil, and he will flee from you.

Ephesians 2:6 And God raised us up with Christ and seated us with him in the heavenly realms in Christ Jesus,

Ephesians 6:11 Put on the full armor of God so that you can take your stand against the devil’s schemes.

1 John 3:8   The reason the Son of God appeared was to destroy the devil‘s work.

Mark 6:7  . . . Calling the Twelve to him, he sent them out two by two and gave them authority over evil spirits.

Luke 10:17 The seventy-two returned with joy and said, “Lord, even the demons submit to us in your name.”

Matthew 28:18 Then Jesus came to them and said, “All authority in heaven and on earth has been given to me. Therefore go. . . .”

John 14:12 I tell you the truth, anyone who has faith in me will do what I have been doing. He will do even greater things than these, because I am going to the Father.

What Makes a Christian Invincible

The Bible insists that the devil and all his henchmen should cower, shivering in fear, before those who cling to Jesus. A baby Christian facing Satan and all his evil hordes should be as one-sided in favor of the Christian as a champion athlete facing a cunning but feeble ninety-year-old man. That word “cunning,” however, is not to be glossed over. Musclemen have handed over their valuables to weaklings armed with fake guns. Strong, intelligent men have been conned out of their money by the enticing but empty promise of get rich quick schemes. Still others have been duped into supposing they were having an Internet romance with a sexy young woman, when they were actually writing to an old man with a cruel sense of humour.

Like weaklings who can only use bluff, and con artists who in reality have nothing good to offer, defeated spiritual foes try to dominate us with terrifying, though hollow, threats or entice us by skillfully baiting their trap. The dilemma we face, however, is that most of us arrogantly suppose we are smart enough to see through his tricks, brave enough to ignore his threats and strong enough to resist the powerfully alluring bait concealing his deadly trap. Us thinking we can outwit this caged, evil genius is like a little child tinkering with a bomb, feeling sure he can dismantle it. Our enemy is supernatural. We are no more resistant to Satan than Simon Peter was able to resist denying Jesus, despite Peter being certain he could do it (Luke 22:33-34).

Nothing but the most drastic action can save us – so drastic that the Bible rightly calls it death. Thankfully, dying with Christ to our old life, leads immediately to rising with Christ to a new life. It is like trading dirt for gold. Nevertheless, it seems almost suicide to those who have never experienced the unique joys and fulfillment that Christ offers.

John 12:25 The man who loves his life will lose it, while the man who hates his life in this world will keep it for eternal life.